I was around seven or eight.

Disney movies were dreams come true, when I was a child growing up in Italy.  Disney World, on the other hand, an impossible dream, since one just doesn’t pick up from Naples, Italy, and takes three little kids on a flight to

Florida.  Unheard of.  Later, Disney Paris came along, but, by that time, I was on the other side of a child’s dreams and had zero interest in lame rides with Mickey Mouse and company.

Anyway, in the middle of my childhood, Mary Poppins burst into my life.

“Andiamo al cinema stasera!”, my father announced. We are going to the movies!  Not something we did often,  My parents, though both educators and financially comfortable, were rather thrifty, and superfluous things were not lavished on us frequently.

I was used to Disney cartoons, and when the movie about this lady with the silly last name began, I was amazed that it was a live action film.

It was love at first sight. This beautiful fairy-like lady gracefully coming down from the sky, hanging on to an umbrella, her elegantly booted feet in a perfect first position, seized my heart, never to release it again.

Poised, perfect Mary Poppins, firm and kind at once, scaring me a little, then making everything better with her (literal) bag of tricks, singing the most beautiful songs I had ever heard with her silky nightingale voice. I memorized all of them, including the unusual and adored Supercalifragilisticexpialidocious, but of course they were dubbed in Italian by an unknown artist with a remarkable voice, so I was singing Supercalifragilistichespiralidoso and Basta un poco di zucchero (instead of Just a spoonful of sugar).

The magic wonder raised me out of my seat in that super-crowded theater, and catapulted me into the surreal world of Jane and Michael Banks, the children we all wanted to be. 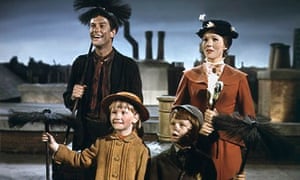 Oh, the dance of the chimney sweeps on the rooftops of London (a city I always dreamed of visiting, as a child), with pretty and talented Julie Andrews twirling among them! The walk to the park, when the four of them held hands and jumped into a picture that Bert had just painted on the sidewalk, and all was transformed into a colorful fairy tale, with glorious new costumes!

Mamma, I would beg, please please, hire a nanny for us! You are always so busy, with school, the market, the house, all those things you always complain about, how worn out and unappreciated you are…You would not have to worry about us three annoying children anymore…And we would live in a special magic world. My desire was so intense that my chest physically ached as I pleaded my case. 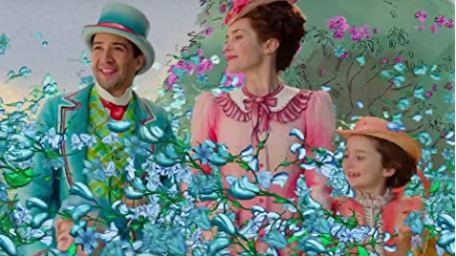 No chance.  My parents had no intention of hiring a nanny, dismissing my passionate insistence with an amused look on their faces.

Needless to say, Mary Poppins has remained my favorite Disney movie of all times, and always shall be.

Then, recently, the magic was back, with the new sequel to the movie.  I took my precious daughters, three and seven (okay, twenty-three and twenty-seven), to see it, and fell in love all over again with my favorite character.  Emily Blunt did a remarkable job with that iconic role, nearly as perfect and captivating as the original, and my heart will forever yearn to live at 17 Cherry Tree Lane.